Tag Archives: Until I Find You

“In increments both measurable and not, our childhood is stolen from us – not always in one momentous event but often in a series of small robberies, which add up to the same loss.”  John Irving – “Until I Find You”.

If you’re a John Irving fan, then you already know this book. And hopefully love it as much as we do. It (or rather an episode in it) proved to be one of the starting points for our new show, Crazy in Love. Not so much the part about Jack Burns becoming an actor and his tragicomic life, but the initial idea – the search by Jack and his mother during his ill-remembered childhood for his father.

And the tattoos. Of course.

Crazy in Love is the heartbreaking tale of Leon (Andrew Buckland) who gets abandoned at the altar by his bride to be. He decides to take his daughter, Ginny (Liezl de Kock) on a countrywide search for her, vowing that he’ll “see her…when you’re standing in front of me”.

His quest quickly becomes an obsession, and at each town they reach where she isn’t, he tattoos that town name on his skin.

It is now some fifteen years later. Ginny is coming of age and starting to realise the desire to achieve her own independence, while he has retreated into alcoholism and despair and his body has become a veritable roadmap of tattoos. As their individual obsessions spiral out of control, and they become lost in their own personal routines and mythologies, a massive shift in their relationship is imminent – if they have the courage and conviction to break out of their own cycles. 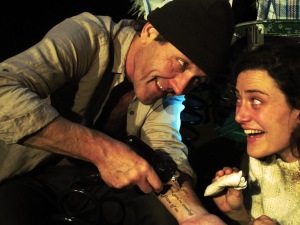 Devised and performed by Andrew Buckland and Liezl de Kock under the direction of Rob Murray, with design by Jayne Batzofin, and told in a captivating blend of physical and visual performance, Crazy in Love is a paean to love and its ensuing madness.

It is currently playing at the Glennie Hall at the National Arts Festival in Grahamstown. We’d dig you to come along and check it out!